Peter Grant is a fabulous character with a wonderful line in dry humour that oils the wheels in this police procedural urban fantasy series. The previous book, Foxglove Summer, was one of my favourite reads of 2014 – would The Hanging Tree maintain this standard? 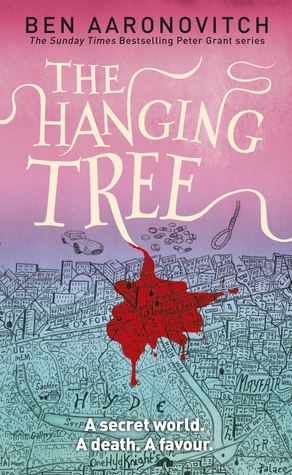 The Hanging Tree was the Tyburn gallows which stood where Marble Arch stands today. Oxford Street was the last trip of the condemned. Some things don’t change. The place has a bloody and haunted legacy and now blood has returned to the empty Mayfair mansions of the world’s super-rich. And blood mixed with magic is a job for Peter Grant. Peter Grant is back as are Nightingale et al. at the Folly and the various river gods, ghosts and spirits who attach themselves to England’s last wizard and the Met’s reluctant investigator of all things supernatural.

At last Peter’s private life seems to be settling down a bit, but when a member of the Tyburn family is embroiled in murder, Peter finds he is not only trying to unravel the crime, but work out exactly where Olivia fits into the puzzle. Because while she might not be lying, she isn’t telling the whole truth, either. In fact, you probably won’t be shocked to discover that not many folks do tell all. As ever, this seemingly sad but routine death by drugs overdose is nothing of the sort – and its consequences reverberate through Peter’s life as well as everyone else at the Folly.

I started thoroughly enjoying this one. Peter, as ever, is sharp and funny and the initial crime deftly draws in a group of folks, some we’ve met in previous books and others we haven’t. So if you’ve never had the pleasure of reading these books before, you won’t be unduly floundering. However, if you’re sensing a but you’d be right. The last book had a case involving missing children which grabbed me right at the beginning. While The Hanging Tree does reveal a couple of major slices of information regarding the overarching story arc with The Faceless Man, I found the pacing somewhat skewed. This major reveal comes at around 73% into the story – and while there is mayhem in spades after that, I did feel by the end that much of the subsequent action was something of an anti-climax.

Ordinarily, this would have been a huge dealbreaker, but Peter’s narrative voice is so dryly funny, it was still an enjoyable, engaging read, though without the punch of Foxglove Summer.
8/10