This is part of the weekly meme over at the Caffeinated Book Reviewer, where book bloggers can share the books and blogs they have written.

It’s been another hectic week. At the start of the week, I was still recovering from the awesome Bristolcon 2016. Mhairi and I travelled up on the train and once more were enveloped in the warmth of The Friendly Con. It was great to catch up with regulars, though there were far too many people I only got to exchange quick greetings with – the likes of Justin Newland, Sophie E. Tallis, Sammy Smith and Jo Hall. I’m sure there are others I’ve missed out, and apologies for the omission. I had the huge pleasure of meeting Rosie Oliver, who I regularly chat with on my blog. She was one of the participants in the excellent ‘Uncanny Valleys of the Mind’ panel about the possibility of sentient robots. The quality of this discussion was superb with moderator Pete Sutton, Rosie, Kevlin Henney, Claire Carter and guest of honour Ken MacLeod.

Other enjoyable panels included ‘SF & F on the Margins’, which discussed the joys of the small presses, 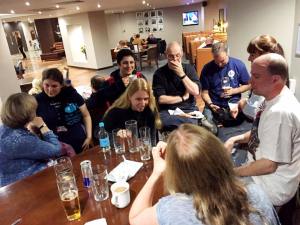 who are providing an increasingly vital role during this time when the larger traditional publishers are finding it tough. ‘The Regiment of Monsters’ panel investigated the contention that too much fantasy lacks diversity and is still stuck in the ‘boys own’ adventures for and about white males. While the panel agreed there was still a preponderance of such fantasy around, there are increasing examples of alternatives to the staple of the plucky group battling overwhelming evil in a quasi-medieval setting. And there was also the delightfully whacky ‘Storming the Castle’ panel moderated by John Baverstock with tyrants (panellists) Ade Couper, Mhairi Simpson, Jacey Bedford and Dom Dulley sporting enough to provide daft ways in which to defend their castles from members of the audience on a dice throw… After that we had no option but to retreat to the bar, where I had one of the best evenings ever. Meeting another blogging friend, Leona was a delight, along with authors Mark Lawrence, R.B. Watkinson, T.O. Munro and G.R. Matthews and the awesome Kitvaria Sarene and Marielle (thank you for those yummy Dutch cookies, which had me falling off the sugar-free wagon – but I can’t be good ALL the time). By the time Mhairi and I staggered back to our hotel room around 2 am, my sides were aching with so much laughing. Thank you so much to everyone who contributed to a fabulous time – I’m grinning as I type at the memory…

Coming back to earth has been something of an effort, though I haven’t had too much time to sit around twiddling my fingers as I was back to teaching again on Monday and Tuesday and on Wednesday Mhairi and I got together for a writing day. On Thursday I was in London for a training day for the CoPE syllabus that Tim is starting to work towards with Sally. We’re now both excited and relieved that we finally have a clear path whereby his exceptional abilities can be formally recognised with qualifications that will help him become an independent adult with a fulfilling career. This week-end I’m grannying.

This week I have read:
Frontier – an Epsilon Sector novella by Janet Edwards
Life on a frontier farming planet in the twenty-eighth century has a few complications. The imported

Earth animals and plants don’t always interact well with the local ecology, and there’s a shortage of doctors and teachers. The biggest problem though is the fact there are always more male than female colonists arriving from other worlds. Single men outnumber single women by ten to one, and girls are expected to marry at seventeen. Amalie turned seventeen six months ago, and she’s had nineteen perfectly respectable offers of marriage. Everyone is pressuring her to choose a husband, or possibly two of them. When Amalie’s given an unexpected chance of a totally different future, she’s tempted to take it, but then she gets her twentieth offer of marriage and it’s one she can’t possibly refuse.

This is a characteristically engrossing read, full of Edwards’ bouncy prose that pulled me into the story which I read in one greedy gulp and surfaced feeling very happy… They ought to bottle her writing and make it available on the NHS.

Songs of Seraphina by Jude Houghton

Some battles bleed so much, and for so long, that the earth never truly forgets their dead. Some battles are born of oppression, and some of greed, and some simply because it was written in the stars. Three sisters—Charlemagne, Cairo and Pendragon Agonistes—are sent from America to England to live with their eccentric grandparents after their mother disappears and their father falls to pieces. But before the girls have time to find their feet, Charlemagne is married off to a dead man, Penny takes a nap and wakes up as a boy, and Cairo is swept into a dangerous romance with a man who wants her for more than her considerable charm. With the girls wrapped up in a conflict they barely understand, they don’t notice that their grandmother is transforming, or that the two demigod assassins who took their mother are now coming for them—if one of them can get over his crisis of conscience.

I realised Jude Houghton was One to Watch when I read his stormingly good science fiction novel Autonomy earlier this year – but this amazing take on epic fantasy has very much confirmed his wonderful talent. I’m keeping my fingers crossed for a sequel – or I might stamp my feet and DEMAND one.

The Hanging Tree – Book 6 of The Rivers of London series by Ben Aaronovitch
The Hanging Tree was the Tyburn gallows which stood where Marble Arch stands today. Oxford Street

was the last trip of the condemned. Some things don’t change. The place has a bloody and haunted legacy and now blood has returned to the empty Mayfair mansions of the world’s super-rich. And blood mixed with magic is a job for Peter Grant, who is back as are Nightingale et al. at the Folly and the various river gods, ghosts and spirits who attach themselves to England’s last wizard and the Met’s reluctant investigator of all things supernatural.

This sparky, London-based urban fantasy has always had a special place in my heart since I read the first one – and like the rest of his fans, I’ve been waiting very patiently for this book.

Waiting on Wednesday – featuring The Hanging Tree by Ben Aaronovitch

Interesting/outstanding blogs and articles that have caught my attention during the last week, in no particular order:
#SPFBO Final Round https://lynns-books.com/2016/11/05/spfbo-final-round/ For those of you who don’t know the acronym stands for Self Published Fantasy Blog Off, which is organised by best-selling author Mark Lawrence, where a group of stalwart book bloggers volunteer to take a stack of self published fantasy novels – this year it was 30 each – and whittle it down to a single entry to be forwarded to this final list.

All My Halloweens http://melfka.com/archives/1994 A delightful article by Joanna Maciejewska on her recollections of Halloween celebrations throughout her life so far – and given she’s something of a traveller, it also takes us to a number of different countries…

The This Is My Genre Tell Me Yours Book Tag https://thetattooedbookgeek.wordpress.com/2016/10/30/the-this-is-my-genre-tell-me-yours-book-tag/ Many thanks to Drew for including me in this particular tag. I’m really looking forward to having a go – but as he threw it open to everyone who likes reading, I thought I’d let others have the pleasure of taking part, too.

9 Tips for Novice Spelunkers and Cave Exploration https://roamwildandfree.com/2016/11/01/9-tips-for-novice-spelunkers-and-cave-exploration/ And this, people, is one of the reasons I love the blogging community so much. I can sit at my computer and learn about places and situations I’ll never encounter from the wonderful people who do.

Many thanks for visiting and taking the time and trouble to comment – and may you have a wonderful reading and blogging week.