This meme was started by Books by Proxy, whose fabulous idea was to compare UK and US book covers and decide which is we prefer. This week we are looking at covers featuring demons. I have chosen The Amulet of Samarkand – Book 1 of the Bartimaeus Sequence by Jonathan Stroud. Though strictly speaking Bartimaeus is a djinni, not a demon…

This offering was published by Disney-Hyperion in 2003. You get a sense of the creature’s age (he is 5,000 years old) and his sharp, sly humour that pings off the page. I love the fact he is sideways on and evidently taunting us with the precious amulet. Pity about the lettering.

This version was produced by Corgi Children’s in 2004. Again, Bartimaeus dominates, this time looking very much like a gargoyle. I’m not sure I like the sepia look, but I do love the lettering on this cover. 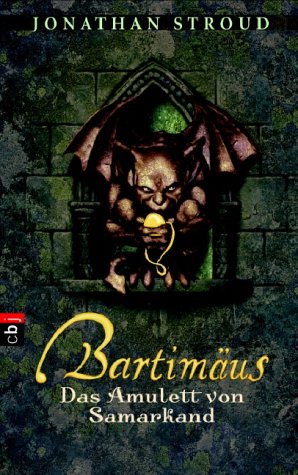 This edition was published in 2004 by cbj Verlag. The overall design is the same as the previous version, but I far prefer the dark colour palette, which I think gives the cover more eye appeal, though this time around I think the font is disappointing.

This edition was published in 2007 by Le Livre de Poche. This is the runner-up for me. I love the drama of the backlighting and the backdrop of the library as Bartimaus appears in Nathaniel’s circle for the first time. My favourite is the first cover – it’s the wicked grin that sells this one for me. A suitably memorable cover for a wonderfully memorable series. Do you agree?