This meme was started by Books by Proxy, whose fabulous idea was to compare UK and US book covers and decide which is we prefer. This week we got together in Proxy’s absence and decided to find covers featuring a moon. So I went back to a classic read I enjoyed far longer ago than I care to mention. And came up with a hatful of covers featuring H.G. Wells’ The First Men in the Moon, first published in 1901.

This is one of the Kindle editions, with a very straightforward, stripped down cover. Still… it’s the Moon, people, so it is still stunningly beautiful.

This was released in 2000 by Dover Publications. I like the font and the detail below it, depicting the underground life of the moon people.

Gollancz released this cover in 2001, to celebrate the centenary of the first publication. I think it’s rather fun and nicely evokes the period feel without trying too hard. 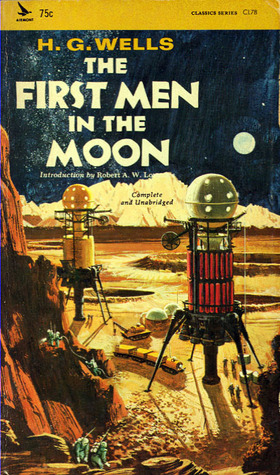 This edition was published in 1965 by Airmont Publishing Company. There is something about covers from that time that I really love.

This is another Kindle edition, produced this year. There is a real period feel to this effort, with lots of enjoyable detail. I think that concentrating on the ship and the two space travellers is a smart move. My favourite is the 1965 cover – which do you prefer? There are shedloads of others, by the way, I just cherry-picked my favourites.