When I requested this one from NetGalley, I wasn’t aware that it was a novella or part of a series. However I’m glad about that, because I probably wouldn’t have chosen it otherwise, which would have been a shame. 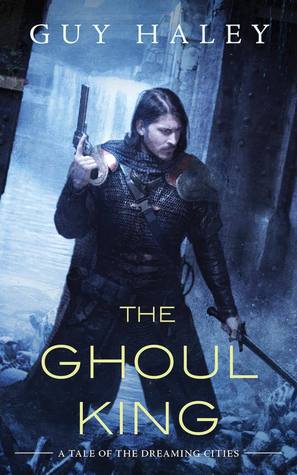 The Knight, Quinn, is down on his luck, and he travels to the very edge of the civilized world – whatever that means, any more – to restock his small but essential inventory. After fighting a series of gladiatorial bouts against the dead, he finds himself in the employ of a woman on a quest to find the secret to repairing her semi-functional robot. But the technological secret it guards may be one truth too many…

I’ve recently read The City of Mirrors, Justin Cronin’s post-apocalyptic tale of a ruined America struggling to cope after a plague of cannibalistic creatures that were once human – see my review here. This adventure has many similarities – set in a post-apocalypse America where nests of vampire-like ghouls lodge in derelict buildings. The difference in The Ghoul King is that surviving humanity is ruled by fearsome angelic beings, who decree that no technology is allowable for any reason – and back up that edict with terrible punishments.

The fact I hadn’t read the first slice of this adventure didn’t matter – I was quickly swept up into the action, following Quinn as he was plunged in the middle of an action-packed quest. Haley writes with pace and economy, managing to pack a great deal in a short amount of time. I didn’t particularly bond with Quinn, but then I don’t think we’re supposed to. However, I really liked Jaxon, the healer driven to rebel as he finds himself treating patients who are dying of illnesses entirely preventable – if only he had access to some of the old, forbidden knowledge. The story is told in first person viewpoint as Jaxon is interrogated by the authorities.

There are some interesting twists along the way  and the ending satisfactorily tied up the story arc, while leaving a couple of dangling ends in readiness for the next instalment in this desperate, ruined world. I have found myself thinking about it at times, while supposedly working on something else, which is always a sure sign that a book has ticked all the boxes. If you are a Justin Cronin fan, then consider tracking down this bite-sized post-apocalyptic world – it is worth it. I received an arc copy of this novella from the publishers via NetGalley in return for an honest review.
9/10