I read The Lost Child longer ago than I care to recall and loved it, so when I went online and found this recent offering, I snapped it up. Would Ash’s ability to spin a great story and interesting world still hold me? 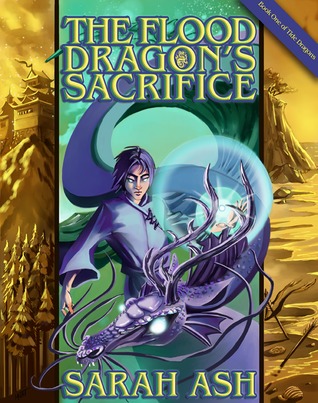 Two rival clans. Two sacred pearls, the Tide Jewels, that can summon the Tide Dragons to protect the empire. Two young men, Kaito and Naoki, one a Black Crane healer, the other a Red Kite shinobi, are sucked into an ancient, unresolved conflict between the gods of land and sea, when the exiled Red Kites steal the Tide Jewels and re-ignite a bitter clan war. Kaito must find a way to restore the emperor’s jewels – but how can it be done without betraying his own clan or angering the gods?

The magic persists. I was immediately pulled into this engrossing, beautifully depicted world that is clearly based upon the closed society of Japan, as the book starts with a bang and the pace doesn’t let up. This epic story cris-crosses the country as the main characters Kaito and Naoki find themselves pitch-forked right into the middle of a family feud, with devastating consequences for all concerned… The story is told in multiple pov, as others also become embroiled in this clan war.

This isn’t a simple good versus evil conflict, where some shadowy nasty villain lurks whose motives are as murky as his scheming, for we are taken into the heads of sympathetic protagonists on both sides of this vendetta. I cared about all the people in the story and could see where they were coming from – even the wilful, high-handed Naoki.

The other dynamic I thoroughly enjoyed is how things are not as they initially appear. So while we are presented with what seems to be the facts at the start of the book, as the plot progresses, we begin to realise that there are other forces at play. Done well, this tactic never fails to have me humming with pleasure as I delve ever deeper into the world, absolutely hooked and wanting to get to the bottom of the mystery. And this deftly balanced plot pulled me along to the climax, with me reading waaay longer than I should to find out what happens next.

The initial storyline is all wrapped up satisfactorily – but there are a whole lot of dangling plotpoints and I’m fervently hoping the second book in the series is on the verge of being released – because I need to know what happens next! I’ll be buying more of Ash’s books – and if you are looking for a really strong, exciting fantasy story with plenty going on, that doesn’t descend into too much gore, then give it a go.
9/10