I enjoy being a Netgalley reader – it pushes me out of my comfort zone every so often. I’m not sure I would have picked up this offering if it hadn’t been on offer, given the description was a decopunk pulp SF alt-history space opera mystery set in a Hollywood-and solar system-very different from our own. 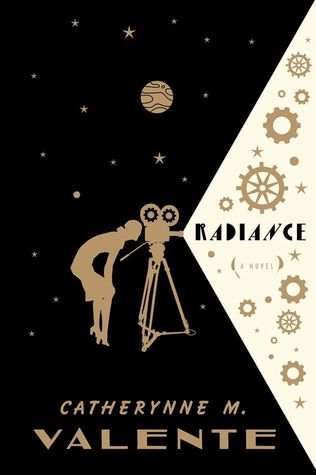 Severin Unck’s father is a famous director of Gothic romances in an alternate 1986 in which talking movies are still a daring innovation due to the patent-hoarding Edison family. Rebelling against her father’s films of passion, intrigue, and spirits from beyond, Severin starts making documentaries, traveling through space and investigating the levitator cults of Neptune and the lawless saloons of Mars. For this is not our solar system, but one drawn from classic science fiction in which all the planets are inhabited and we travel through space on beautiful rockets. Severin is a realist in a fantastic universe.

For starters, this is a novel with a fractured timeline, so the story skips around and is told in a mixture of interviews, gossip and through extracts of old classic film, among other narrative modes. So you need to pay attention. Initially I wondered what I was getting myself into – for the sheer oddness of the world wasn’t anything I was prepared for, given that I’m allergic to reading any kind of blurb. Was it worth the effort? Oh, yes.

The story revolves around Severin Unck, whose peculiar upbringing on film sets while accompanying her father and a series of step-mothers, has left her with a desire to make her own films – this time the non-fiction type. This is a world where the Moon and all the planets in the solar system are inhabitable, just about… with the help of a substance secreted by the mysterious callowhales who live on Mars. So we’re also talking about a mysterious alien creature on top of everything else – though there are a plethora of those, which are often renamed for their Earth counterparts. In addition to being a whole lot busier than our solar system, there are some other oddities to this version of the 20th century. Films continue to be manufactured as silent, despite there being the technology to produce talkies, which are considered crass and generally rejected by the general populace. No… I didn’t get it, either. But Valente has a knack of announcing this is how it is and after an initial jolt of surprise, I found myself accepting it. But what this does, is overlay the whole book with the period feel of the early 1920’s – even when the date is later. Though the timeline jumps around like a flea on a hot brick…

There is a mystery surrounding Severin’s disappearance and this is the narrative engine for the book, as it circles around the characters who impacted on her life at various times and finally, the puzzle is fully explained. On the way, all sorts of ideas are examined, such as what makes art; how we define family; the nature of goodness, as opposed to badness; what makes us human… In less skilful hands this potpourri of a story could have rapidly descended into an unmanageable mess and it is a testament to Valente’s technical ability that it didn’t. Furthermore, she manages to produce an extraordinary novel bristling with life and vibrancy, peopled by an astonishing cast of eccentrics.

If you yearn to read something completely different – and even if you don’t – go and track this book down. It won’t be to everyone’s taste, but I’ll guarantee you won’t have read anything else quite like it.
10/10