I loved the first book in this series, which I got for Christmas – see my review here. Would this second book be as enjoyable? 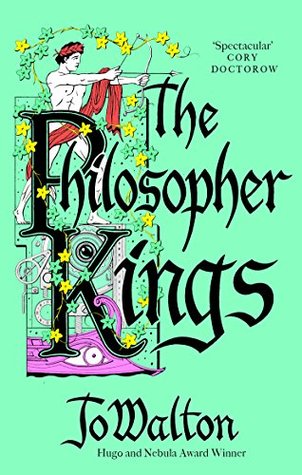 Twenty years have passed since the goddess Athene founded The Just City. The god Apollo is still living there, albeit in human form. Now married and the father of several children, the man/god struggles to cope when tragedy befalls his family. Beset by grief and fuelled by a bloodthirsty desire for revenge, he sets sail for the mysterious Eastern Mediterranean to find the man he believes may have caused him such great pain.

Jo Walton is an amazing writer. Truly. And if you look at the notion of Athene and Apollo cooking up a social experiment to set up a city based on the precepts advocated in Plato’s Republic, roll your eyes and decide to pass, don’t. Go and get hold of it. This science fiction/fantasy mash-up is an alternate history, with a twist of magic courtesy of the gods. I cannot compare it with anything else out there, because I simply can’t recall reading anything else quite like it.

Walton could have easily turned this into a turgid, ideas-led story with all the narrative pace of a  dozing snail – but she is an innate storyteller with an easy readable style. While I had enjoyed reading Apollo’s story in the first book, in this book we have far more of an insight into his vulnerability, now he is living in human form. The other main character who caught my interest is his daughter, Arete, which means Excellence, which brings its own problems, as she feels the continuous pressure to live up to her name…

Now the original population of The Just City have adjusted to the consequences triggered by the Last Debate initiated by Sokrates, they are in a state of constant preparedness for warfare, also advocated by Plato. But war has consequences – consequences that immortal gods don’t generally have to face.

Apollo is overwhelmed by grief and fury and is determined to go after the culprits for the cause of his misery. His grown children also want to accompany him on this voyage, including Arete. But first, there is a lot of discussion as to whether they should be setting off, at all. After all, Athene has deliberately set up her Just City in the shadow of a huge volcano, whose explosion will swallow it, so that all the people she has pulled out of their own timespans will be able to revert back to their own historical time. But what happens if they now travel further afield, spreading their sophisticated advancements as they go? How will that impact on the historical timeline?

The pacing and shift in setting is perfectly designed to widen the concept of the story and give us greater insights into how the characters react when placed in a variety of dangers, both natural and manmade. I also love the nifty way in which the story unfolds, such that Walton marries up our knowledge of the ancient world with these events. And as for the ending – well that’s a doozy! I certainly didn’t see it coming, and yet, now that I think about it – it’s absolutely logical that a certain individual would become involved in this whole business.

So now, I’m really looking forward to reading Necessity, the third book in the series, which is due out in July. I have had a storming start to 2016, having read a slew of superb books – and the Thessaly series is right up there as outstanding.
10/10