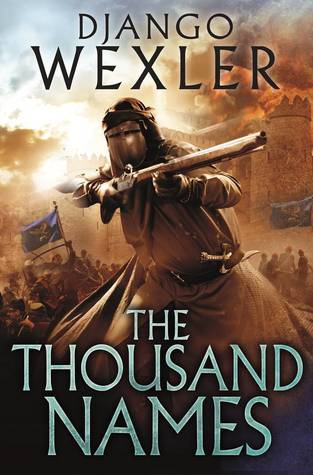 Himself and I make a good pair. Whereas I find any starscape-spangled cover irresistible, Himself is unable to pass by a book displaying weaponry. It’s surprising how often we can swap these books, though. And that’s what happened to The Thousand Names. Frankly, I wouldn’t have plucked it off the shelves in a long lifetime – but once Himself finished it, he plonked it in my lap with the words, “You’ll like this one.”

In the desert colony of Khandar, a dark and mysterious magic, hidden for centuries, is about to emerge from darkness. Marcus d’Ivoire, senior captain of the Vordanai Colonials, is resigned to serving out his days in a sleepy, remote outpost, when a rebellion leaves him in charge of a demoralised force in a broken down fortress. Winter Ihernglass, fleeing her past and masquerading as a man, just wants to go unnoticed. Finding herself promoted to a command, she must rise to the challenge and fight impossible odds to survive.

Marcus and Winter are the two main protagonists and Wexler has nicely balanced the narration between the two. I thoroughly enjoyed this tale. It bounces along with plenty of nice touches of humour, detailed world-building that doesn’t hold up the pace and engrossing storyline. It was also refreshing to have a military-based fantasy so richly character-led. I found myself really caring about both protagonists, as well as many of their fellow soldiers. This shapes up to be pleasantly complicated, as there is a political agenda to all the warfare kicking off that we barely skimmed, and I’m betting will feature a whole lot more in the next book in the series, The Shadow Throne, which I’m delighted to report is by my bed.

Winter, a runaway orphan destined to be married off to the first man who pays for her, disguises herself as a boy and joins up. Her natural talent for tactical thinking under pressure ensures her survival, but she is always having to keep herself aloof. And before anyone rolls their eyes and thinks this is a ridiculous fictitious event, there is on record there is a steady trickle of girls and women who joined both the army and navy from the 16th century onwards to serve, often in appalling conditions, alongside their male comrades and often it was only when they were wounded they were discovered.

The battle scenes are vividly depicted, with plenty of tension and I stayed up waaay long than I should have to discover what happened next. Wexler brings his clean, punchy writing style to bear on the supernatural elements and the magic is described with a real sense of wonder that is often lacking in fantasy books. Altogether, this is a very promising series and I’m thoroughly looking forward to reading the next one.
9/10