This is the third book in an urban fantasy unashamedly wallowing within the new cool version of geekiness made popular by the likes of The Big Bang Theory. So if you enjoy gaming, are happy to join in debates as to the relative merits of the Green Lantern versus Spiderman and will happily spend a week-end watching Firefly, while ranting about the idiots who cancelled the series in the first place, you’ve found your spiritual home. Because the funky aspect of this magical system is that Ree and her team can draw their magical powers from their enthusiasm and knowledge of pop culture. 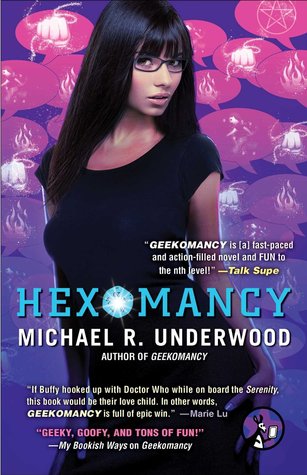 When Ree’s long time nemesis Lucretia is finally brought to trial and found guilty for the deadly attack on Grognard’s, the Geekomancer community breathes a collective sigh of relief. But Ree and her crew soon discover that Lucretia has three very angry, very dangerous sisters who won’t rest until they have exacted revenge on certain Geekomancers.

It took me just a while to find my bearings as this book evidently picks up where Celebromancy left off. But given that I’d just jumped bang into the middle of an on-going series, I’m not going to grizzle too much about that one – apart from anything else, it didn’t take too long to sort out what was going on. But I will issue a word of warning – if constant allusions to music, films, TV programmes and the characters peopling them annoys you, then steer clear. As it happens, even when I didn’t know or get exactly who it was being referenced, Underwood is sharp enough to spell out the magical power they are invoking.

Ree is an engaging, likeable heroine, with an interesting backstory. She is a ‘glass half full’ lass, rather than the tortured, angsty type, so the overall tone is fairly upbeat despite the various disasters and mayhem that befalls them. I enjoyed her positive energetic outlook and the buzz of the bar, Grognard’s, where she works as a waitress is effectively captured. That said, it isn’t all a bundle of laughs. Underwood handles the building threat well, and the action scenes whip through with plenty of tension – more so, because he isn’t afraid of offing significant characters. There was also a couple of pleasing story twists I didn’t see coming.

All in all, this is an enjoyable addition to the genre – and while I can readily see that the continual mention of games and TV programmes might not be to everyone’s taste, I found this particular magical system loads of fun. Though I have a hunch I would have got even more out of Hexomancy if I’d done the sensible thing and started this series with Book 1.

My copy of this book was provided by the publishers through Netgalley, while my review is entirely my own work and opinion.
8/10