Susan Hill has always been a writer with an edge. Best known for her long-running gothic horror play The Woman in Black, now a horribly mangled film, and a series of disturbing books – see my review of I’m the King of the Castle here 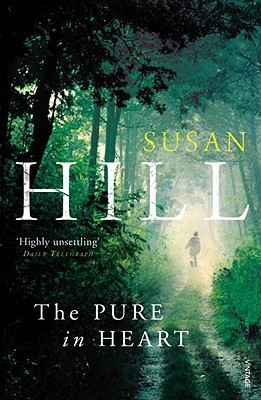 – she has now ventured into Crime. Will her character Simon Serrailler convince in this very crowded genre?

It is spring in the quiet English cathedral town of Lafferton when a little boy is snatched as he stands with his satchel at the gate of his home, waiting for his lift to school. Meanwhile a severely handicapped young woman hovers between life and death and an ex-con finds it impossible to go straight…

We start with Serrailler on holiday in Venice, struggling to come to terms with the shocking death of one of his team in a previous adventure. I immediately cared about this difficult, introspective man as we see him during one of his most emotional vulnerable moments, which was a smart move – because Hill doesn’t have her main protagonist emoting all over the place. You won’t be surprised to find he drifts back to work early, where he is suddenly caught up in a distressing case of a disappearing child.

But this isn’t your average crime thriller. While there is no blood or gore, it is most definitely not a cosy murder mystery, either. Hill uses the prism of her police whodunit to examine some gnarly issues in contemporary Britain. One is the yawning gap between the haves and have-nots. When ex-con Andy is released from prison and is forced to move in with his sister and her family on the local housing estate, the emotional and material poverty of his life prospects are starkly portrayed. The other difficult subject Hill tackles in this book is what should happen when someone severely disabled, unable to move, speak or care for herself becomes seriously ill. How hard should the doctors fight for her life? How is the quality of life measured? And who decides?

I’m conscious that I’ve depicted this book as some worthy, hard-hitting treatise on the faultlines in our society, but it is also a page-turner with the overall tone nothing as bleak as Stephen Booth’s Cooper and Fry novels, for instance. Simon is one of triplets with a close bond to his sister Cat, who is happily married with children and he spends a fair amount of time popping round to see her. Hill also has a knack of writing difficult characters with compassion and understanding, so even if you don’t agree with their actions or motives, you do empathise with their problems, which meant I cared all the way through. The overarching story running through this book is the police hunt for poor little David, who goes missing while waiting for a lift outside his gate. Hill fully explores the trauma such a disappearance inflicts on the family and community – and the ending was a shock, at least as far as I was concerned. Has Hill pulled it off? Yes – I think she has.

I’m definitely going to be getting hold of the other books in the series. Like Lesley Thomson and Stephen Booth, Hill has used the genre to explore some of the trickier social problems confronting modern Britain, as well as providing an engrossing story. If you like your crime novels with depth and intelligence, then track down this enjoyable, thought-provoking book.
10/10