This children’s fantasy offering is interesting. It is an alternative history, set in the aftermath of the English Civil War during the Protectorate when Oliver Cromwell is ruling. Except what sparked this version of the Civil War isn’t the Divine Right of Kings and Charles I’s stubborn insistence on trying to wrest control away from Parliament – it is the Witch Wars, where Charles’ refusal to hound witches to extinction is the cause of the war. 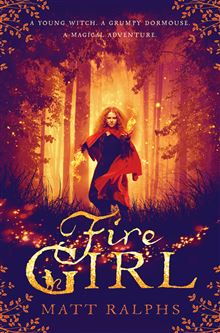 Twelve-year-old Hazel Hooper has spent her whole life trapped in a magical Glade created by her mother, Hecate. She’s desperate to meet new people and find out about the world. And, more than anything, she wants to be a witch. But when her mother is kidnapped by a demon – everything changes . Suddenly Hazel is alone in the world. Well. . . not quite alone. For it turns out that Hazel does have magic – she’s just not very good at controlling it. And she may have accidentally created a grumpy familiar in the form of a dormouse called Bramley.

I really liked the nifty way that Ralphs has kept his young protagonist isolated from the rest of the 17th century world, where young girls were expected to be demure, very obedient and quiet. Not at all the attributes that would appeal to modern youngsters looking for an adventurous read – and Hazel is suitably feisty and courageous because she has been shut away from the rest of the world tucked away in the magical Glade. The relationship she has with Bramley is also sparky – literally at times, as Hazel’s control over her lethal magic is tenuous. The little mouse is thoroughly fed up at the prospect of all the adventures, and provides an amusing, running commentary on the proceedings.

Hazel is immediately swept up in a series of adventures as she wanders the countryside, trying to work out what has happened to her mother, and encounters other people who are prepared to help. I very much like the fact that none of them are what they initially seem. The antagonist and his evil team are genuinely frightening – the demon Rawhead and the giant poisonous spider Spindle in particular are full of menace. As is the smooth-talking Nicholas Murrell, who initially led the persecuted witches against Cromwell’s troops, but his thirst for power had led him down some dark paths. I enjoyed the fact that he is not some pantomime, two dimensional villain, but was evidently determined to stand up for an oppressed minority with courage and bravery during the war.

All in all, this is an accomplished, enjoyable tale set in a complex, believable world where the magical rules all nicely hang together. Any niggles? The formatting in the ebook leaves much to be desired – I very much hope it gets sorted out before the book goes live in August, as the chapter headings are accompanied by short extracts from ‘contemporary’ books, embellished by attractive decoration which is all thoroughly mangled.

I’m assuming the book is targeted at young teens, but this punchy, well written tale will have wider appeal for older fans who enjoys a well told fantasy adventure, which will be published in August 2015. The review copy was provided via Netgalley by the publisher, and all the opinions in the review are my own.
8/10