This is another review that first appeared on my blog back when no one was around much to read it. And one of the reasons why I’m re-issuing it, is that the book is a gem and deserves to be far more widely read.

Ahni Huang is hunting for her brother’s killer. As a Class 9 Empath with advanced biogenetic augmentations, she has complete mental and physical control of her body and can read other people’s intentions before they can even think them. Faced with deceptions behind deceptions, Ahni is caught in a dangerous game of family politics—and in the middle of it all lies the fate of her brother.

Her search leads to the Platforms, which orbit high above Earth. On the Platform New York Up, ‘upsider’ life is 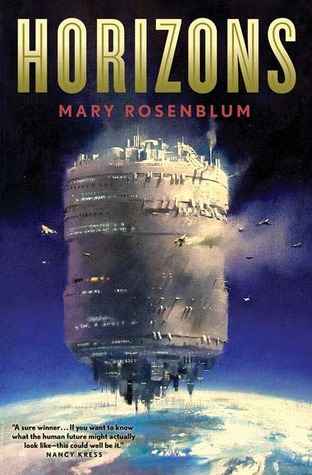 different. They have their own culture, values and ambitions – and now they want their independence from Earth. One upsider leader, Dane Nilsson, is determined to accomplish NYUp’s secession, but he has a secret, one that, once exposed, could condemn him to death. When Ahni stumbles upon Dane during her quest for vengeance, her destiny becomes inextricably linked to his. Together they must delve beyond the intrigue and manipulative schemes to get to the core of truth, a truth that will shape the future of the Platforms and shatter any preconceived notions of what defines the human race.

This is my favourite kind of science fiction. Rosenblum’s characters lead the action, particularly her apparently invincible protagonist Ahni. All the main characters are pleasingly complex and whisk you into an interesting and intricate plot backlit by a beautifully developed world littered with enjoyable details.

However, what lifts this excellent read from the common herd are the issues that Rosenblum addresses in her story. All the best science fiction, in my opinion, gives us some believable insights into some of the dilemmas that future technology will pose for our descendants. Rosenblum shines a light on some of the problems that are starting to loom uncomfortably close – such as genetic manipulation; cloning; what defines humanity and the faultlines along which humankind will divide. While there is nothing particularly original about these subjects, in the light of the scientific advances the likes of Michio Kaku is predicting, the more discussion and thought we give to these matters, the better.

All in all, Horizons is definitely one of my favourite science fiction reads and I’m really sorry she hasn written more novels, though I notice that she is a prolific short story writer.
10/10