I have to declare an interest – Rosanna Ley is my former Creative Writing tutor at Northbook College and I’m delighted at her success with her last three books. That said, if I didn’t enjoy reading her work, I wouldn’t be reviewing her books. I really enjoyed The Villa – see my review here. Would Bay of Secrets be as much fun? 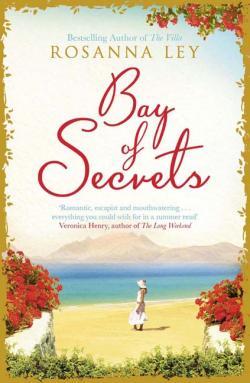 Spain, 1939. Following the wishes of her parents to keep her safe during the war, a young girl, Julia, enters a convent in Barcelona. Looking for a way to maintain her links to the outside world, she volunteers to help in a maternity clinic. But worrying adoption practices in the clinic force Sister Julia to decide how far she will go to help those placed in her care.

England, 2011. Six months after her parents’ shocking death, 34-year-old journalist and jazz enthusiast Ruby Rae has finally found the strength to pack away their possessions and sell the family home. But as she does so, she unearths a devastating secret her parents, Vivien and Tom, had kept from her all her life.

This book has three protagonists, two are women and one is a man. Ley followed the lives and fortunes of three women from the same family in The Villa – but there the resemblance ends. These three storylines initially seem quite disparate. I could see fairly early on where two of them were going, but the story of the nun seemed to stand alone. Not that was a hardship, as I found her story compelling.

I found myself really caring for each of these people, and hoping they would somehow prevail. Ruby, in particular, tugged at my heartstrings. Losing parents suddenly in an accident, at any age, must be a terrible body blow. I like the fact that Ley doesn’t assume that after a couple of months, Ruby will simply ‘bounce back’. And of course it is complicated by the fact that when clearing out their house, Ruby makes a momentous discovery, which means that her anger at having been shut out from this terrific secret all her life is now entangled with her grief. Ley effectively depicts Ruby’s sense of betrayal and hurt without dropping the pace or narrative drive, by setting Ruby’s story alongside that of Julia. It’s a neat trick to pull off and works very well.

Ley is a very sensual writer, who immerses her readers in her surroundingss by vivid descriptions of the smells, sounds and haptic experiences of her characters. This aspect of her writing came to the fore when Andrés becomes a part of the story. He is a painter and Ley’s prose kicks up a notch when we see the world through his eyes. Her descriptions are lyrically beautiful, without losing the pace and immediacy of the story. It’s one thing to embark on a story with several apparently unconnected characters, but in order to succeed, the story needs to come to a satisfactory climax that affects or involves everyone. Ley triumphantly succeeds in producing a moving, shocking conclusion that I simply didn’t see coming – which is why I’ve been so very careful not to lurch into spoiler territory.

If you enjoy contemporary fiction that leaps off the page, shines a light on a terrible episode of Spanish history, and provides an engrossing story then go looking for Bay of Secrets. It’s an accomplished, cracking read. 10/10