I’d seen several posters for this book and when I read the rave reviews on Amazon and the first few pages – after several really disappointing science fiction novels, I was more than ready to be swept away. Did The Martian tick the box? 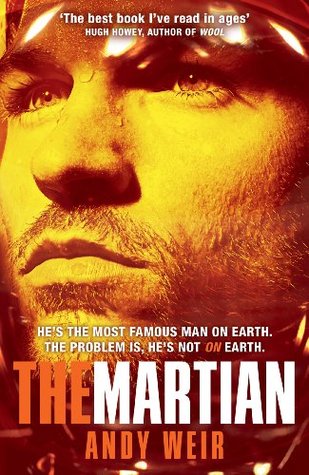 I’m stranded on Mars. I have no way to communicate with Earth. I’m in a Habitat designed to last 31 days. If the Oxygenator breaks down, I’ll suffocate. If the Water Reclaimer breaks down, I’ll die of thirst. If the Hab breaches, I’ll just kind of explode. If none of those things happen, I’ll eventually run out of food and starve to death. So yeah. I’m screwed.

That is the blurb in Mark Watney’s viewpoint – typically laconic. Several of the reviews called this a 21st century version of the Robinson Crusoe story, and it neatly sums up the first section of the book. Like Defoe, Weir is very keen on demonstrating all the fixes and lash-ups that Watney resorts to. But being an astronaut on a NASA space program, the ingenious ways he manages to avoid death involve a great deal more technology and scientific knowhow than Robinson Crusoe had to grapple with. Weir had to dive into a truly brain-bulging amount of research in order to get this level of detail and apparent plausibility. Although I’m no scientist, nothing jarred – not his reaction or the relationship with NASA.

However, if Weir had kept the story going at that level, I would not have stayed engrossed right to the end. The narrative pacing is pitch perfect – despite the plethora of detail, Weir never loses touch with the fact that he is telling a story. All the setbacks and dramas had a complete ring of sincerity while they all duly turned up at the right part of the book in order to keep me reading, I only realised it afterwards when I flipped back and checked.

As the repercussions of Watney’s misfortunes reverberate throughout NASA and into the wider world, the sense of everyone being caught by his plight, helplessly watching his gritted struggle for survival adds yet another angle to the unfolding drama. As does the question of whether they can mount a rescue effort that will reach him before his food runs out… I am not in the business of giving spoilers so won’t say too much more about it – with a book so gripping, it would be a major sin to ruin such a rich, enjoyable reading experience. This is one of the best science fiction books I’ve read this year, and even if you’re not in the habit of reading sci fi – give this one a go. And if you do, you’ll know why they are currently filming the story…
10/10