This post appeared on my blog back in the early days when only those lost or truly intrepid ventured for a visit, so has only been viewed by a wandering spider and my doting mother. I thought perhaps it could stand a second outing…

Unseen Academicals is the thirty-seventh Discworld novel, which, for those who don’t know, is set in a flat world balanced on the backs of four elephants, standing on the back of the Great A’Tuin – a giant turtle – that swims through space. Football has come to the ancient city of Ankh-Morpork – not the old-fashioned grubby pushing and shoving, but the new, fast football with pointy hats for goalposts and balls that go gloing when you drop them. And now the wizards of Unseen University must win a football match without using magic, so they’re in the mood for trying everything else. 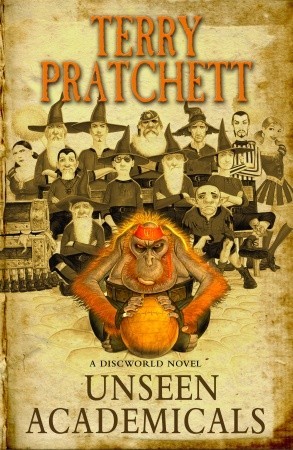 The prospect of the Big Match draws together a likely lad with a wonderful talent for kicking a tin can, a maker of jolly good pies, a dim but beautiful young woman who might just turn out to be the greatest fashion model there has ever been, and the mysterious Mr Nutt. (No one knows anything much about Mr Nutt, not even Mr Nutt, which worries him, too.) As the match approaches, four lives are entangled and changed for ever. Because the thing about football – the important thing about football – is that it is not just about football.

This is vintage Discworld fare. Old favourites such as Archchancellor Mustrum Ridcully and Lord Vetinari, tyrant of Anhk-Morpork, head up the cast of colourful and varied characters, who also include newcomers Dave Likely, Glena and Mr Nutt. As ever, Pratchett uses his fantastic backdrop to make sharply acute observations about contemporary life. There are the usual suspects – the rights of the individual versus the state; responsibility of power – and in this book, football is gently prodded for the more ridiculous aspects of the sport and the fashion industry also gets the Pratchett treatment.

However, the darker tone apparent in some of the more recent Discworld novels, such as Making Money, Monstrous Regiment and Thud! is less obvious in Unseen Academicals, which contains more gags and one-liners. For ardent Discworld fans, this book ticks all the boxes. However, if by some fluky chance you’ve managed to miss the joys of Discworld, I wouldn’t advise that you start with Book 37 in the series. While they don’t exactly run in strict chronological order, there is a definite progression with characters. So, in order to get the best out of Discworld, start with the exuberant fun of The Colour of Magic and work forward. You’ll find – when you get there – although lacking the inspired brilliance of Small Gods (my personal favourite), Unseen Academicals is a worthy addition to the canon.
8/10