I met up with Gaie at Bristolcon, who kindly gave me a copy of her book as it sounded right up my street. I’m already a fan of her writing – read my review of Babylon Steel here, which is memorably enjoyable adventure.

Eveline Duchen is a thief and con-artist, surviving day by day on the streets of London, where the glittering spires of progess rise on the straining backs of the poor and disenfranchised. Where the Folk, the otherworldly children of fairy tailes and legends, have all but withdrawn from the smoke of the furnaces and clamour of iron. But events overtake Eveline and as she is forced into someone else’s schemes, she begins to realise that her actions could affect everyone she knows and cares about… 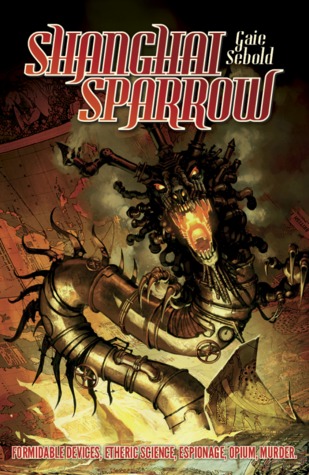 I’ve tweaked the blurb somewhat – but this fantasy thriller set in an alternate Victorian England has all the classic steampunk ingredients. With an additional splash of Sebold magic. Eveline is a cracking protagonist – full of spirit and ingenuity, yet with sufficient vulnerability that I really cared what happened to her. And plenty already has… Eveline certainly has the family knack for getting sucked into life-threatening adventures – and as investigations into etheric science gather pace, Eveline draws down the unwelcome attention of powerful people who want results.

The supporting characters are also great fun – Uncle James bounces off the page with his smug arrogance and conviction that he should be the family inventor; Mr Holmforth is suitably menacing and driven; while the scatty and very likeable Beth who enjoys nothing more than fiddling around with the new-fangled steam engines, is a great foil for Eveline’s dare-devil nature. As well as producing a cast of strong characters, Sebold manages to make them all entirely plausible by providing strong motivating factors for each one without silting up the action, or lessening the pace. It’s a trick that is a whole lot harder to accomplish than Sebold makes it look. And for all the forward momentum and breeziness in this book that is characteristic of steampunk, Sebold doesn’t hesitate to show the darker side underbelly of her world, where the poor and sick are left to fend for themselves. Where children roam the streets begging or stealing. Where women can be bundled off to asylums if they annoy their male relatives by their ‘unwomanly’ behaviour. I’d like to say that aspect of Sebold’s story is pure fiction – but it isn’t.

The fantastic elements are also well handled – her otherworldly protagonist in many ways mirrors Eveline with his sharp wit, ability to think outside the box – and the fact that for all his cleverness and strong survival instincts, he is also trapped.

Sebold gives more than a nod to the likes of Dickens and Conan Doyle with some of the plot twists as this adventure unfolds – some I saw coming and some I didn’t… But with the energy crackling off the page, I just wanted to read on. In fact I finished off the book in three greedy gulps, staying up waaay too late to find out what happens to Eveline. Though I understand that this is the start of a series, so I shall be looking out for the sequel. And if you enjoy steampunk adventure tales with characters who ricochet off the page, then give this one a go – it’s a blast.
9/10