I dipped my toe into the past when I sat down to watch a re-run of this 1984 offering which I recalled blew me away when I first watched it. This American romantic science fiction film, directed by John Carpenter, tells the story of an alien who has come to Earth in response to the invitation found on the gold phonograph record installed on the Voyager 2 space probe. Problem is that his space ship is shot down and he finds he is being pursued by legions of police and a rather grim Robert Phaelen as Major Bell, whose single aim is to neutralise any threat from the visiting alien. 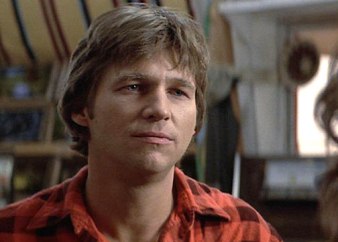 Of course dear Jeff Bridges isn’t remotely threatening – in fact as he first emerges from his ship, he is nothing but a bunch of lights (think the eco-bulb version of the opening credits to Close Encounters of the Third Kind…). The first house he floats through belongs to recently bereaved Jenny Hayden, played by Karen Allen – using the cine film running and a lock of her dead husband’s hair, the light show morphs into Scott Hayden. So a lot of the film’s success hinges on whether Bridges’ characterisation is convincing as an alien inhabiting a human body. The answer has to be overwhelmingly yes. He was nominated for an Academy Award for Best Actor for the performance and in my humble opinion, the fact he didn’t receive it means that he was robbed. Yep – I know that F. Murray Abraham was great as Salieri in Amadeus, but I still think the snob factor presided. Can’t have some old sci-fi film scooping the award, when it’s up against a biopic about Mozart, can we?

It wouldn’t have helped the film if Karen Allen’s performance hadn’t matched Bridges – and fortunately she plays the part perfectly. The real chemistry between them is too often missing in many modern, glossy big-budget productions. It was also interesting to note that the acting was on a smaller scale than we often see these days, going back to the more nuanced sophisticated style of the 1940’s character-led films I still love watching.

So did this thirty-year-old film live up to my memory of it? After having to lie down in a darkened room to recover from the fact that it

was thirty years ago when I first watched it – the answer is – yes. Even the soundtrack, often the aspect in 1980’s films that really graunches, works well, particularly at the admittedly really weepy and sentimental ending… But the acting throughout is exceptional and although there are special effects, they didn’t go all out for those – just as well, seeing how quickly they date. This film is principally about the characters and their progression. It is still floating around the various channels on TV and if you enjoy a spot of science fiction, give it a go. It’s worth it just for Bridges’ masterclass in how to act like an alien without any make-up.
9/10