I was hooked the moment I picked up the first book, Fortune’s Pawn – read my review here. I immediately burned through the second book Honour’s Knight, but would I enjoy the third offering as much? I generally don’t read a series straight through as it is much easier to spot an author’s quirks that way. However this third volume was due back at the library, so I had no choice…

Government conspiracies. Two alien races out for her blood. An incurable virus that’s eating her alive. Now, with the captain missing and everyone – even Devi’s own government – determined to hunt her down, things are going from bad to impossible. The sensible plan would be to hide and wait for things to blow over, but Devi’s never been one to shy away from a fight, and she’s getting mighty sick of running. It’s time to put this crisis on her terms and do what she knows is right. But with all human life hanging on her actions, the price of taking a stand might be more than she can pay. 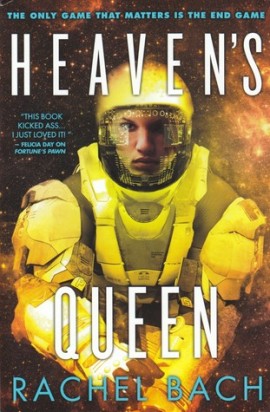 If you like your action fast-paced, with plenty of twists along the way, then this series ticks the boxes. There is no shortage of fights, with a satisfying variety of different backdrops providing a whole range of challenges. And while it seems that Devi will prevail because she always had – there was always a sense that this time around, she may not manage it.

Bach really knows how to keep cranking up the stakes – and the overall narrative pace throughout the series is perfectly judged. This trilogy really hangs together well, with each book taking a slice of the storyline and overall action. I think if I had read them spaced out, I would have lost more than I gained by reading them together.

Devi is a wonderful protagonist – vulnerable enough to make us care, especially as she is battling for her very survival – but also amazingly gung-ho about Life in general and hers in particular. The first person viewpoint really helped me bond with her and Bach managed to make me entirely sympathetic to her and her ideals, while profoundly thankful I’ve never run into her on the High Street after she’d had a few at the local pub… Devi is different – a product of her Time and upbringing. Bach is too good a writer to tell us this – but she manages to show that difference in action repeatedly.

The love story between her and Rupert is complicated – just because she cares for him, doesn’t stop her blasting him in the chest at pointblank range when he gets in her way. I liked her worries that her feelings for him make her weaker and less effective as a soldier. It is also interesting that she finds for the first time in her life, the rage she uses to hone her battle instincts also accelerates the symptoms of the disease ravaging her. So she has to exercise self control – not one of Devi’s strengths…

In addition to producing an outstanding protagonist that will live long in my memory – I was also interested to note the theme running through the book. Bach raises the question whether the interests of the greater good should ever allow us to trample on the rights of a few individuals. She comes down fairly emphatically on the side of the individual versus the greater good – a classic American theme that runs through many films and books produced on the other side of the pond. The ending is entirely satisfactory and I was relieved and heartened to see a couple of plotlines that could be expanded on for yet more Devi fun in the future. I profoundly hope so – she is a great character and I’m already missing her.
10/10