I finally settled down to read the latest exploits in this entertaining alternative history adventure. Novik’s premise is the Napoleonic Wars that convulsed Europe now have the addition of fighting dragons, but can she continue to provide fresh twists in this long-running series? See my review of Victory of Eagles here

Former Aerial Corps captain Will Laurence and his faithful dragon, Temeraire, have been put out to pasture in Australia – and it seems their part in the war has ended just when they are needed most. The French have invaded Spain, forged an alliance with Africa’s powerful Tswana empire, and brought revolution to Brazil. With Britain’s last desperate hope of defeating Napoleon in peril, the government that sidelined Laurence swiftly offers to reinstate him, convinced that he’s the best man to enter the fray and negotiate peace. So the pair embark for Brazil, only to meet with a string of unmitigated disasters that forces them to make an unexpected landing in the hostile territory of the Incan empire.

Novik has been very smart in the way she has managed to use the on-going war to shift Laurence around the globe. The last book 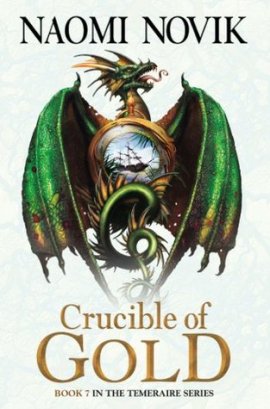 Tongues of Serpents – see my review here – had Laurence and Temeraire transported to Australia and enduring the hardship and disgrace of the raw penal colony. However, when Britain is hard-pressed, the authorities have no trouble in reinstating the pair and sending them across the ocean to South America. As ever, events don’t run according to plan – and the twist that overset everything was a complete surprise. It didn’t take long for me to bond once more with Temeraire – I love the high-handed, temperamental dragons and their constant vying for honour amongst each other, along with their devotion to their handlers.

Though once more, the issue of slavery surfaces to create tensions – Laurence is violently against the practice, an unusual stance for a serving officer. There can be a problem in historical adventures when the protagonist’s anomalous views and tastes clash with the time in order to make him sympathetic to modern readers. However, Novik has effectively established where Laurence’s  anti-slavery ideas come from in previous books – while watching Temeraire suffer at the hands of the British Navy, who are reluctant to treat the dragons as anything other than fighting monsters – only serves to harden his attitude. The interesting spin that surfaces in this book, is that in South America the human population has been decimated by smallpox brought in by the Spanish conquistadors, so the local dragons are desperate for more humans, whom they rule and take care of. Increasingly, Temeraire and the other British dragons find this idea appealing…

Novik continues to find intriguing themes within the variety of adventures and hardships she has her intrepid duo endure – and once again I fell right under her spell. Though, whatever you do – don’t start with Crucible of Gold. If you haven’t yet encountered this series and you have ever enjoyed 19th century deeds of derring-do, Novik’s evocation of the time and the fabulous Temeraire are a must-read addition. And I need to track down the next in the series sooner, rather than later.
10/10