I recently read The Long Earth – see my review of it, here. And was sufficiently intrigued to hunt down the sequel. Would the story take off?

The Long Earth is open. Humanity now spreads across untold worlds linked by fleets of airships encouraging exploration, trade and 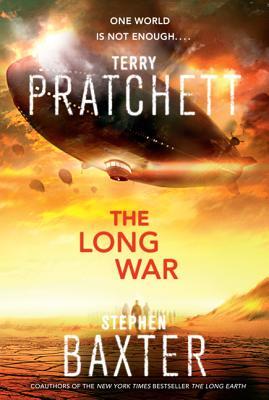 culture. But while mankind may be shaping the Long Earth, the Long Earth is, in turn, shaping mankind – and a collision of crises is looming. More than a million steps from our original Datum Earth a new America has emerged – a young nation that resents answering to the Datum government.  And the trolls – those graceful, hive-mind humanoids whose song once suffused the Long Earth – are, in the face of man’s inexorable advance, beginning to fall silent… and to disappear. It was Joshua Valienté who, with the omniscient being known as Lobsang, first explored these multiple worlds all those years ago. And it is to Joshua that the Long Earth now turns for help. Because there is the very real threat of war…
…a war unlike any fought before.

And there’s the blurb. Which quite niftily sets out the backstory before plunging us into the current action – a smoothly accomplished process as you’d expect with two such experienced authors at the helm. I have to say, the premise of The Long Earth has really stuck with me since I read the book, which took me slightly by surprise. I have the memory of a goldfish and frequently completely forget a book once I’ve finished it – even if I’ve thoroughly enjoyed it. Not so this one. It might have something to do with the slightly breathless Oh my goodness, look at this! tone in which the journey of exploration is undertaken across the multitudes of Earths, harking back to early science fiction exploration stories.

If this aspect of The Long Earth grated, then don’t bother with The Long War – that genuine sense of wonder that these days is so often muted by the need to funnel the action and backdrop through one or two protagonists, is just as evident. And the multiple storylines continue squirrelling off in a variety of different directions. Normally, this type of book annoys the heck out of me – and it isn’t just that both Pratchett and Baxter can write. So can George R.R. Martin, but A Song of Ice and Fire series lost me at A Storm of Swords, although I’d been struggling before that – and these days I wouldn’t have reached that point. These days, if a book and I don’t bond reasonably fast – I’m done. But as I zipped through The Long War, I waited for the scattered storylines… the large cast of characters… the fact that I don’t find any of them all that likeable – with the exception of Sister Agnes – to chew away at my pleasure. And none of it did. Though I found myself reflecting that the word Mankind is a real misnomer – as a species, we’re not kind at all. Certainly not to anything willing, compliant and useful, like the trolls. Certainly not to our environment… In fact, the idea of the Long Earth throws up all sorts of interesting moral issues, as well as a sobering insight into the fragility of Life’s perch on the planet’s surface.

It doesn’t hurt that there are flashes of humour in amongst all the excitement and conflict caused by having literally thousands of new worlds pitch up on the doorstep – some of them had me laughing out loud. If you devoured early Heinlein, Jules Verne and H.G. Wells in great greedy gulps, then I’m guessing you’ll find this series right up your street – and even if you didn’t, I’m still recommending it on the grounds that in amongst the sprawling plot and cast of eccentrics, there is a plenty of food for thought.
9/10