This series was recommended by Himself and my mother, so it was with some anticipation that I started reading the ebook.
When a child’s bones are found on a desolate Norfolk beach, Detective Chief Inspector Harry Nelson calls in forensic archaeologist Dr Ruth Galloway. Nelson thinks he has found the remains of Lucy Downey, a little girl who went missing ten years ago. Since her disappearance he has been receiving bizarre letters about her, letters with references to witchcraft, ritual and sacrifice. Ruth is soon drawn into the Lucy Downey case and into the mind of the letter writer, who seems to have both archaeological knowledge and eerie psychic powers. 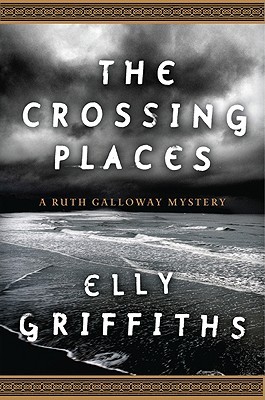 Ruth Galloway is a forty-something archaeologist who lives on her own at the edge of Saltmarsh in an isolated cottage with a couple of cats. I found her character immediately appealing and realistic. Her concerns about her weight and her single status struck a chord with me – and I suspect many other female crime fans. This series is evidently going to be something of a partnership between Ruth and Detective Chief Inspector Harry Nelson. So did I also feel an affinity with the other main character? Yes. Nelson is clearly a complicated personality and – unlike Ruth and many other detectives in other series – he is a family man with two daughters and an attractive wife. I am looking forward to seeing how this all plays out during the series. The other powerful factor in this book is the stunning backdrop – the salt marshes. Griffiths evidently knows and loves this landscape and has it bouncing off the page as a character in its own right, particularly during the climactic scenes where the dangerous surroundings heighten the drama and tension during the denouement in a classic showdown that manages to provide plenty of surprises.

Of course, while a sympathetic protagonist is obviously important – this is a whodunit, so what really matters is how Griffiths handles the plot. Do we know exactly who did it halfway through the story, or does it all come as a complete surprise? I’m not noted for my skill in spotting the culprit, but I thoroughly enjoyed Griffiths’ ability to provide plenty of twists and turns, without completely losing the day to day realism that a contemporary crime thriller needs. It’s a trickier balance to achieve than Griffiths makes it look. And another potential bear pit she manages to deftly sidestep is the fact that her victim is a child.

Obviously when a child goes missing, our protective instincts are instantly aroused – whatever the circumstances, a child is never anything other than an innocent victim. However, when a story highlights this scenario there are also distressed parents to portray and possible cross-questioning of other upset children… It can turn into a mess – I’ve discarded more than one whodunit halfway through either because of the casual manner in which the parents’ grief is depicted, or it’s simply too harrowing. I wasn’t tempted to do put this book down – Griffiths treats the disappearance of a child with sufficient seriousness, yet neither was the situation overwhelmingly grim.

Small wonder that this book created the buzz it did when it first hit the bookshelves, back in 2010 – and I’m delighted that I now have another well-written, edgy crime series to read. In the meantime, if you haven’t yet sampled Elly Griffiths’ world, track down The Crossing Places – you’ll be thanking me if you do.
9/10