I picked up this copy at the World Fantasy Conference in Brighton and was intrigued by the blurb. Would this book live up to the interesting world depicted on the cover?

Something is wrong in Aquae Sulis, Bath’s secret mirror city. The new season is starting and the Master of Ceremonies is missing. Max, 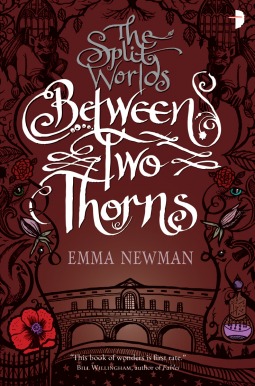 an Arbiter of the Split Worlds Treaty, is assigned with the task of finding him – with no one to help but a dislocated soul and a mad sorcerer.  There is a witness, but his memories have been bound by magical chains only the enemy can break. A rebellious woman trying to escape her family may prove to be ally Max needs. But can she be trusted? And why does she want to give up eternal youth and the life of privilege she’s been born into?

This is an appealing read, setting the story between three worlds – Mundanus, which is our world, Exilium where the Fae actually live and the Nether, which isn’t an actual world, but between the other two worlds, where there isn’t a sky and no one ages. Society has stagnated there and its customs and fashions reflect the Regency era. If you’re getting the impression that this is rather a complicated set-up, you’d be right. But Newman had already written fifty stories set in this world and released them during the year before Between Two Thorns came out, which she was originally intending to self-publish before Angry Robot snapped it up.

Catherine is one of the main characters, hiding out in Mundanus, having fled her overbearing family as she is stifled by the prospect of life as a highborn woman in Nether. I enjoyed her story arc – and at times skimmed the others to get back to it. She is certainly one of the most well drawn and interestingly complex characters and I want to get my hands on Any Other Name largely to discover what happens to her.

I also loved Max, the Arbiter, or rather, the gargoyle who is part of his persona. If you could imagine an unlikely detective duo – a crippled, blank-faced grumpy person teamed with a smart-mouthed, emotional gargoyle must be right up there at the top of your list. I did find I had to concentrate on the plotting, as the various viewpoint characters along with their narratives wound around and through the three worlds, while the enormity of the crime gradually unfolded alongside Catherine’s efforts to escape her arranged marriage.

The pace moves along at a fair clip, and at times I did feel that Newman’s familiarity with these characters and the world meant that some explanation and scene setting was missing. A couple of times I checked to see if this was the second book in the series, because I did feel I had landed bang in the middle of an adventure and was slightly playing catch-up. This niggle isn’t a dealbreaker, though. I thoroughly enjoyed this genre mash-up and the story arc came to a satisfactory conclusion, while leaving some plotlines dangling for the next book, which I shall certainly be getting. Apart from anything else, I really want to know what happens to Catherine and Max – and if you like your fantasy with a different twist, give Between Two Thorns a go. I won’t guarantee you’ll love it, but it certainly provides a detailed world with a difference and there’s no denying that Newman is a talented writer whose punchy, individual voice makes this a memorable read.
8/10