This author was recommended to me by one of my friends on the West Sussex Writers’ committee – and a week later, I managed to pick up a paperback copy at a secondhand book shop, so it was clearly meant to be.

Nothing can break the bond between sisters…

When Beatrice gets a frantic call in the middle of Sunday lunch to say that her younger sister, Tess, is missing, she boards the first flight home to London. But as she learns about the circumstances surrounding her sister’s disappearance, she is stunned to discover how little she actually knows of her sister’s life – and unprepared for the terrifying truths she must now face.  The police, Beatrice’s fiancé and even their mother accept they have lost Tess but Beatrice refuses to give up on her. So she embarks on a dangerous journey to discover the truth, no matter the cost. 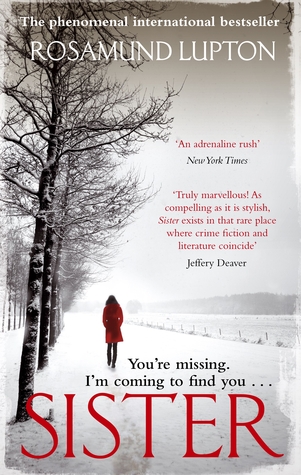 I picked this book up, idly skimmed down the first page – and was caught. I was already reading a book, with several others queuing up behind in the correct order (not that I’m obsessive, or anything) and I have views on books pushing in and upsetting the carefully arranged variety I have already organised. But this book wasn’t going to wait.

The strong first person viewpoint and constant tension, coupled with the fine writing had me utterly engrossed, so that I gorged on the book in two hefty sittings. Though I did have to break off at one stage to find some tissues because I was weeping… The protagonist is beautifully handled as we follow her desperate search for her sister, which entails finding out a series of very uncomfortable truths about herself. Lupton is adept at braiding the surroundings, weather and cast of well depicted, vivid characters through Beatrice’s consciousness, so that she is one of the strongest and most interesting protagonists I’ve read for a while.

But, of course, if you’ve read the book, I’m sure you’re waiting to hear what I have to say about the ending. Well – wow. I wasn’t expecting that. I actually dropped the book, and lost my place. And no, I’m not saying anything else about it, as I’m allergic to spoilers and the whole structure of the book hinges around this one.

Does it work? Um. Still not sure, actually. But it certainly makes this book an outstanding read that I’m sure I’ll still remember when a lot of other so-called enthralling reads have melted into the mush at the bottom of my cranium’s crevices. Because this really is a gripping book, and if you get a chance to read it, do so. If nothing else, so that you can weigh in with your opinion about the ending – I’d appreciate any feedback on it. I think she pulled it off, but it really is an audacious move…
10/10