We had a great discussion on Twitter a couple of days ago on what defined being human – many thanks to @tennisfanatic21 @TorontoLydia and @BillyDees for some really interesting observations. It’s amazing what you can pack into 140 characters. I came up with some fairly obvious stuff, such as opposable thumbs; ability to work co-operatively together; ability to communicate abstract concepts. But I think it was Billy Dees who mentioned imagination and telling stories. And THAT was a duh! moment. 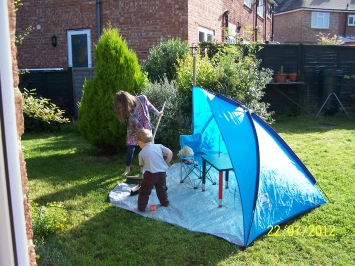 Right now, my two grandchildren are supposed to be going to sleep. But it’s a hot and sunny evening, so they are playing. It’s a complicated game, as far as I can make out. Thomas the Tank Engine is on a major adventure with pirates involved, some fairies, a lost baby princess and the Wee Free Men. They have just encountered some aliens, apparently. How old are they? Three and eight and from the time they wake up to the time they fall asleep, given half a chance, the pair of them are off in some make-believe world that is a mash-up of the films, books, stories and songs they know – and a slice of their own particular take on what they’ve experienced. If they happen to be staying with me singly, I hear a stream of conversation (or in the case of my grandson, a lot of roaring and fighting) as they people the house with a horde of imaginary characters busy chatting, fighting or eating with each other.

Did I have a hand in encouraging them? Of course – but it took a fairly small nudge from me for Frankie’s imagination to ignite. And she pulled her brother into her games – I recall he was ‘Superbaby’ with the ability to fly, fight evil and swim underwater to chase baddies before he could walk or talk… So, while they are busy learning a host of behaviours and skills, they are even busier translating those experiences into a vivid tapestry of stories that they inhabit.

Many of us head for a favourite film/book/computer game in order to inhabit another world when we require a bit of R & R. And there are those of us who are driven to write down our imaginary worlds, in the hope that others find them equally entertaining. It may well be that those of us who do so never properly grew up. But, watching my grandchildren immerse themselves in their imaginary games with complete concentration, sometimes for hours, I’ve come to the conclusion that using our powerful imaginations to weave imaginary worlds is as much a part of being human, as those clever opposable thumbs enabling us to tie knots and make tools.