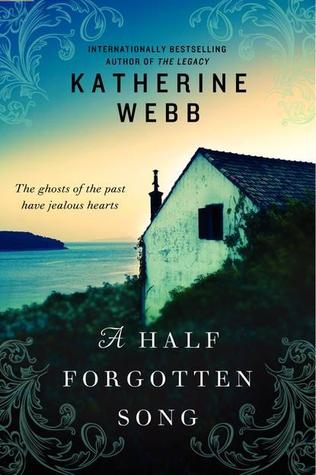 I’d read The Legacy a couple of years ago and loved it. And – more to the point – it is among the handful of books that I can vividly recall. So, would I find Webb’s latest offering just as engrossing and memorable?

1937. In a village on the Dorset coast, fourteen-year-old Mitzy Hatcher has endured a wild and lonely upbringing – until the arrival of renowned artist Charles Aubrey, his exotic mistress and their daughters, changes everything. Over the next three summers, Mitzy sees a future she had never thought possible, and a powerful love is kindled in her. A love that grows from innocence to obsession; from childish infatuation to something far more complex. Years later, a young man in an art gallery looks at a hastily-drawn portrait and wonders at the intensity of it. The questions he asks lead him to a Dorset village and to the truth about those fevered summers in the 1930s…

Those of you familiar with The Legacy will recognise that Webb has again revisited the dual narrative, with one story unfolding back in the past and one storyline gradually progressing in the present. The past finally meets the present in an exciting and unexpected denouement – but the engine that drives this story is a lost, unloved soul who anchors all her hopes and affection on a charismatic artist. Webb apparently loosely based Charles on Augustus John, who had a reputation as a womaniser and clearly loved women’s bodies with a strong, sensual appreciation – you only have to look at his sketches and paintings to realise that.

Webb’s depiction of Mitzy’s harsh childhood, where she spends much of time scavenging the surrounding countryside for plants, herbs, fish and small animals to eat or make up potions for her mother to sell, is far from the rural idyll that soft-focused adverts use. Yet, she still manages to evoke the beauty and rhythm of the Dorset countryside – so much so, that I fell asleep with the colours of this book swirling in my head. The initial friendship of Charles’ two girls is a revelation for Mitzy, who is shunned by all the village children, except for Wilf. This particular narrative caught at my heart and as it spirals into a tailspin of obsession and the inevitable darkness, so much so that I found myself reading through the night to discover what happens to forlorn Mitzy.

Zach’s story becomes entwined with Mitzy’s narrative when as an expert on Charles Aubery, he is commissioned to write a book about the artist and decides to investigate his personal life – particularly the events surrounding the tragedy that caused him to unexpectedly join up in the early days of World War II, when he died on the Normandy beaches. Zach has miseries of his own, as his ex-wife is emigrating to America with his only daughter, all set to start a new life with another man – and if he doesn’t complete this book, he’ll have to return the advance and shut down his struggling art gallery. But when Zach visits the village and discovers that one of Aubery’s most famous sitters is still alive as an old woman, he is astonished and realises that if he can get her to talk about those days, he will have a unique angle on the artist.

So, piece by piece, the story is uncovered as Mitzy starts to remember. Or tries to forget…

The themes of remembering, of obsessional love and loyalty are all played out in the small cast of vividly depicted characters, where Mitzy’s tragic story rises above the rest, as she has to continue to live with the consequences of what happened all those years ago.

The book may be called A Half Forgotten Song – but I won’t be forgetting this beautifully told tale for a long, long time.
10/10