There are degrees of science fiction – some books are long on character development and the social consequences of futuristic living, while being short on the science that underpins it, known as soft science fiction. Other books are far more concerned with the science and gismos that will actually power and run our future worlds – the hard science fiction. Egan, as a physicist, has always been on the harder side of the genre, but the important difference – for me – is that he is also able to write convincing characters into the bargain. 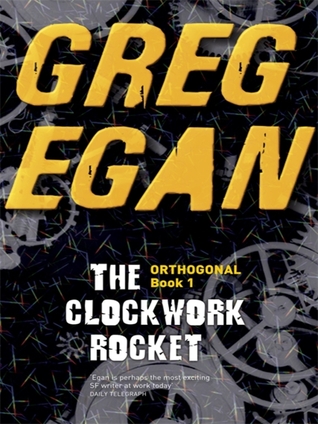 However, this time around he has produced a truly different world – one where the laws of physics as we know them no longer work. As he explains on his website – along with a series of diagrams – this fictional world he’s invented where light travels at differing speeds is due to changing a minus sign to a plus sign in a mathematical formula that governs the geometry of space-time. He calls this a Riemannian universe as opposed to the Lorentzian version we inhabit. In Egan’s world, Einstein’s Theory of Relativity simply doesn’t make sense. Further, the basic humanoid template, so prevalent in most space opera adventures, is also off the table. Egan demonstrates a head-swivelling leap of imagination by producing a race of beings who don’t look like us, don’t breed like us… It’s an awesome achievement.

However, is it readable? Does it provide entertaining fiction?

In Yalda’s universe, light has no universal speed and its creation generates energy. In Yalda’s universe, plants make food by emitting their own light into the night sky. As a child, Yalda witnesses one of a series of strange meteors, the Hurtlers, that is entering the planetary system at an immense, unprecedented speed. It becomes apparent that her world is in imminent danger—and that the task of dealing with the Hurtlers will require knowledge and technology far beyond anything her civilization has yet achieved.

I’m not going to tie up the rest of this review by plunging any further into the science that underpins the book, fascinating though it is. This is, after all, an analysis of whether this book actually works as a piece of fiction.

This is one of the most exciting books to be produced in the genre for years – I cannot think of another story that equals the sheer inventive genius displayed by Egan. Readers can take on board as much or as little of the physics as they wish – but his cleverness would be beside the point if the narrative was so hampered by the long passages describing the world that we all ceased to care whether the heroine prevailed or not. However, Yalda’s story gripped me from the start and didn’t let go. We first meet her working on her family’s farm. In a world where mothers’ bodies break down and normally divide into four to provide two sets of twins – two co’s – Yalda is different. She doesn’t have a male twin, so is larger than normal and she has also encountered a fair amount of prejudice in her short life over her unusual beginning, often regarded as a freak.

We follow her adventures – both physical and intellectual – as she strives to make sense of the world around her, despite being hampered by the ever-present threat of her biological imperative. Which creates social tensions – women effectively cease to be once their children are born and some rebel against losing their lives, while the conservatives in power, inevitably male, strive to ensure that women can’t get hold of the drugs that the prevent this process.

Against these social frictions looms a far more pressing problem – when the scientists observing the Hurtlers lighting up the sky come to the conclusion that they pose a major risk to their own world and decide to build a rocket to investigate the problem and see if they can fix it, before their own planet is annihilated.

The rest of the novel is taken up with series of challenges posed by such a project. The concept of an interstellar ark is an oft-trodden theme within the genre, but the unique physiology of Egan’s beings immediately provides sufficient novelty – and Yalda’s strong personality certainly ensured that I kept turning the pages, completely hooked.

This is a wonderful book – and yes, there are chunks of physics, complete with diagrams within the narrative. You have the option of slowing down and fully absorbing Egan’s invented work, or skimming over the scientific details and getting on with the story. One way or another, I think this ambitious and remarkable series will still be regarded as a major benchmark in science fiction for years to come and I look forward to reading the rest of the books just as soon as I can get my hands on them.
10/10