After reading The Radleys, I picked this offering off the library shelves thinking that I’d appreciate an amusing, smart read at the start of 2012. Hm. Well that didn’t work out… 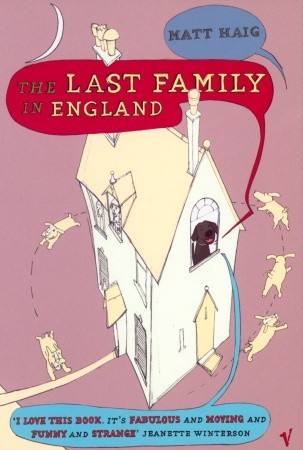 Prince is an earnest young dog, striving hard to live up to the tenets of The Labrador Pact (Remain Loyal to Your Human Masters, Serve and Protect Your Family at Any Cost). Other dogs, led by the Springer Spaniels, have revolted. Their slogans are ‘Dogs for Dogs, not for Humans’ and ‘Pleasure not Duty’. Mentored by an elderly Labrador called Henry, Prince takes his responsibilities seriously, and as things in the Hunter family begin to go badly awry – marital breakdown, rowdy teenage parties, attempted suicide – his responsibilities threaten to overwhelm him. And down in the park it’s even worse. Henry has disappeared: Falstaff the Springer Spaniel wants to lead Prince astray… What will he do next?

I got sucked in by the comedic cover and Jeanette Winterson’s description that the book is fabulous and moving and funny and strange. And – yes – she’s absolutely right, it’s all of those things. It’s also poignantly sad.

Haig writes in first person viewpoint as Prince, the idealistic youngster, straining every nerve to live up to the lofty ideals of the Labrador Pact. His depiction of the world from a dog’s view with the emphasis on scents, hearing and decoding human body language certainly allowed me to suspend my disbelief for the duration of the book, which is crucial to the success of the story. And there’s plenty going on – we see a slice of family life just before the Hunter’s world starts to spiral away into crisis mode.

Haig holds the tension masterfully, allowing the series of secrets that rock Prince’s world to surface, one after the other. Nothing is as it seems. Prince finds himself surrounded by mounting difficulties at home; Henry is no longer around to give him advice and Falstaff’s carefree joie de vivre becomes ever more tempting… Even the family cat advises him to step back, not to get too involved in human affairs. But Prince is still driven on by his sense of duty.

This isn’t a long read. Each chapter is only a couple of pages long and event move along at a breathless clip. The language is pared down and the short, simple sentences allow a great deal to be packed into the modest word count and it can easily be read in a single sitting, if you so wish. As with The Radleys, the action is interspersed with extracts from a how-to manual – in this case it is The Labrador Pact that Prince has learnt by heart. The denouement isn’t a shock, Haig has heavily foreshadowed it, but I was surprised at the final twist which adds an extra slice of sadness to the ending.

The simple writing style is deceptive – Haig is dealing with some hefty issues in this slight book. At what point does loyalty become a lethal liability? Is unrealistic idealism a dangerous luxury in a world where cynical selfishness appears to be the norm? Because, of course, this book is actually nothing at all to do with dogs – it is about choosing how to live your life. Are you going to bounce through like a Springer Spaniel, carefully avoiding any commitment? Or shoulder responsibilities even if they buckle you in the process? Even those of us who have knocked about the world for a while should sometimes take the time to reconsider their choices – and I personally think that this should be required reading for every teenager in the land.
10/10