This Hugo Award winner of 2005 brought back some interesting echoes of a book I’d read in 2009 – Poul Anderson’s Tau Zero, where the crew are trapped inside a space ship travelling through time to the end of the universe. 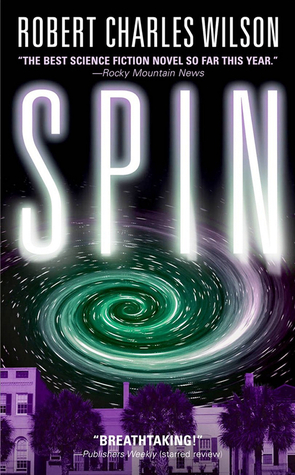 The time is the day after tomorrow, and three adolescents – Diane and Jason Lawton, twins, and their best friend, Tyler Dupree – are out stargazing. Thus they witness the erection of a planet-spanning shield around the globe, blocking out the universe. Spin chronicles the next 30-odd years in the lives of the trio, during which 300 billion years will pass outside the shield, thanks to an engineered time discontinuity. Jason, a genius, will invest his celibate life in unravelling cosmological mysteries. Tyler will become a doctor and act as our narrator and Jason’s confidante, while nursing his unrequited love for Diane, who in turn plunges into religious fanaticism.

Told in first person POV through Tyler’s viewpoint, we have a ringside seat into the fractured society caused by the shield and echoed in its impact on the three main characters. Wilson manages to keep the narrative bouncing between a social commentary on the unfolding science fiction events driving the story, as well as giving us the protagonist’s personal journey. It is a clever trick to pull off and one that he manages with deft skill.

However, the fractured narrative timeline means the reader has to stay sharp – there were occasions when I had to flip back a couple of pages to ensure complete understanding of what was happening. This isn’t a criticism, merely an observation. Some books are light enough to be able to skim through without paying absolute attention – and this isn’t one of them.

Wilson’s excellent handling of the main characters gives us a real sense of their emotional damage, alongside the consequences for near-future society of this immense happening. I wasn’t too sure about the Martian, however. While I had a vivid image of his odd physical appearance, the sense of ‘otherness’ Wilson was striving to portray seemed to get rather swallowed by the events cascading around his sudden arrival. However, this is a picky point.

Spin does exactly what a well-written science fiction book should – presents an interesting technological issue, creating plenty of drama, while recording the reactions of the main protagonists and addressing some thought-provoking conclusions or themes. Through Diane’s experiences, Wilson takes a hard look at what religion has to offer frightened humanity – and what worldwide fear can do to civilisation. Somewhat predictably, religion doesn’t come off very well, but Wilson is adept at giving us snapshot views of how the world is coping, without holding up his narrative with pages of info dumping.

His handling of the alien shield encompassing Earth was convincing enough to suspend my disbelief throughout the novel – even to the jaw-dropping and frankly improbable ending. What he captured very ably was the desperate search for answers – the why this was happening. All in all, an excellent read and a real treat for both ‘hard’ and ‘soft’ sci-fi fans.
10/10

This is one of the fluffier offerings of chic-spec I’ve read. In a sub-genre that generally doesn’t take itself too seriously, this book is more firmly tongue in cheek than most – think Clueless rather than Buffy. For starters, the protagonist is a ditzy blonde with a thing for shoes. Nothing can make Betsy Taylor give up her shoe fetish – not even dying and rising as the new Queen of the Vampires. Only being royally undead doesn’t mean there aren’t still credit card bills to be paid. Luckily, Betsy lands her dream job selling designer shoes at Macy’s Department Store.

But then there’s a string of vampire murders in town and Betsy has to enlist the help of the one vamp who makes her blood boil: the

oh-so-sexy Eric Sinclair. Only the last time she ran into Sinclair she accidentally fulfilled an ancient prophesy – and ended up married to him…

Written in first person POV, the story might be fairly light-hearted – but it is well crafted and the character is convincingly dim. Which I find endearing – and I am conscious that writing a stupid heroine isn’t as easy as it might seem, having tried it and thrown the result across the room in disgust…

If I have a niggle, it is that Betsy tends to go on and on about how much she dislikes Eric – while the reader knows that in stories of this type that means that it is a sure thing the pair of them will finally get together. I also found the liberal use of the f-word rather jarring. I realise that swearing and graphic sex scenes are par for the course in a lot of books in this sub-genre. But in this particular story, the swearing just didn’t seem to fit the chirpy and humorous mood – having said that, I’m conscious that I’m older by several decades than the target audience.

But do I celebrate the fact that this book – and a slew of others like it is out there? You bet. If only I’d had this sub-genre to fall back on years ago when I wanted to chill out from the grittier stuff – instead of tired old Mills and Boon! Young women brought up on a diet of quality fantasy want something ‘other’ than the clichéd staples of secretaries dating bosses… nurses dating doctors… in their light romances. And now they have it with vamp chicks strutting around, biting/agonising over human lovers and/or solving murders. The love interest might be just as trite – but at least the heroine is less annoyingly vapid and the hero is less worryingly chauvinistic.

And if your taste runs to this sub-genre, you could do a lot worse than Undead and Unemployed.
7/10