There’s a problem, I think, with extremely prolific writers. The obvious one is that someone regularly releasing two novels a year will – inevitably – at times have something published that would have been far better if only it had a chance to ‘incubate’ a bit longer, either in the author’s imagination or in the editing state. But another issue is that an author with fifty-something novels to his name will occasionally produce a book, or series that is absolutely outstanding – which somehow gets overlooked. Fortunately, someone at Tor had the good sense to realise that this had happened to Modesitt’s Ghost books and so Of Tangible Ghosts and The Ghost of the Revelator were republished together in an omnibus edition. 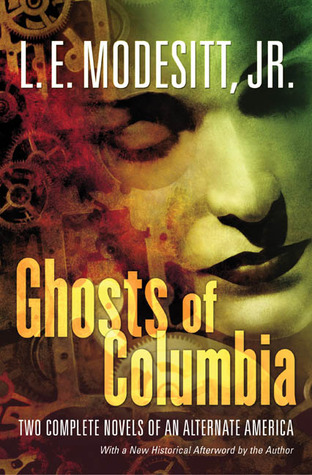 I’m very glad they were – and that I stumbled across the book on the library shelves. This is a world where people who are killed violently or accidentally with sufficient time to realise that they are about to die, become ghosts. So large battles become undesirable – battlefields overrun with hordes of ghosts make an area uninhabitable until they fade. The point at which history has also diverged is when the colonists from the Mayflower landing in the New World succumb to the plague, denying England any foothold on the American continent. Which means a chunk of Canada and North America is settled by the Dutch, in a nation called Columbia with New France down in the south and the Mormon state of Deseret jostling in an uneasy truce. For the time being…

Drop into this interestingly original world, ex-espionage agent and political minister Johan Eschbach, now living quietly in New Bruges and working as a lecturer on Environmental Studies at the Vanderaak Centre who tells his story in first person POV. And we are sucked into a world where everything is in its place; where people all know each other in a small university town and Johan, recovering from the death of his wife and small son, gives us daily details of the food he eats, the lessons he teaches and his interactions with the Dean, his colleagues and cleaning lady – and the ups and downs of his relationship with the French opera singer and refugee, Llysette duBoise. Against this backdrop political tensions rise, murders occur and Johan is inexorably pulled into the deadly intrigue going on around the new research into ghosts.

It is masterfully done. Johan is a wonderful character, whose depth and complexity powers the whole narrative. Modesitt even pulls off the very difficult trick of giving the reader information about Johan through what he won’t discuss – his first wife and dead son… This is Modesitt at his blinding best – and that best is very good, indeed. Because the other major component that needs to really work in an alternate history, is the world.

In this particular plot Modesitt not only had to have the basis tenant nailed, he also needed to ensure all the details are convincing – this isn’t some paranormal fantasy where we can shrug our shoulders and assume that the odd flaky anomaly is ok – it’s a big ask. But Modesitt rises to the challenge magnificently and as far as I’m concerned, this is the best alternate history I’ve ever read. The world is there in a welter of detail that in its everyday ordinariness acts as a striking contrast to ghosts and the increasingly dangerous situation besetting Johan, thus adding to, rather than diluting the narrative tension.

Any niggles? Well, there’s one – which would have been a major problem if this review had been about Of Tangible Ghosts, rather than the omnibus. Modesitt slightly messes up the climactic denouement at the end of the first novel, so that I wasn’t completely sure exactly what had occurred – until I’d finished the first chapter of the second book where it is all properly explained. As I’ve been reading the second book, I’ve been slightly dreading the end – what if he does the same thing? It’s one of the major sins in my view – taking your reader all the way, only to rush the final details, leaving an unsatisfactory muddle. I’m delighted to report that Modesitt brings the plot to a complete and well explained conclusion in the second and final book in the omnibus. So despite that one glitch, I’m giving this book a 10.

If you enjoy well depicted, convincing worlds where the main character leaps off the page, complete with believable foibles – this is a must-read book that has been somehow buried under the weight of the rest of Modesitt’s output. A real shame… because it’s right up there as one of my most enjoyable reads, ever – and the skill required to produce such a gem shows that at his best, Modesitt is one of the outstanding speculative fiction writers of his generation.
10/10