This novel of Reynolds is not part of his Revelation series, though posthumans still figure largely in the plot and his brain-achingly different worlds are entirely believable. 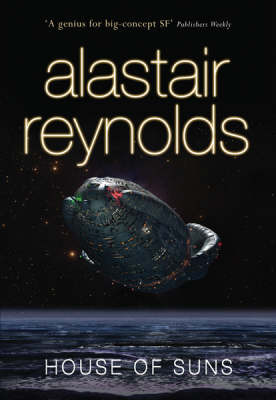 Six million years ago, at the dawn of the human Starfaring era, Abigail Gentian split herself into a thousand clones and launched them into the galaxy.  Their purpose was to gather more memories and wisdom than a single human could accumulate in a universe bound by Einstein’s laws.  Periodically the shatterlings of Gentian Line meet for a grand bacchanalian reunion, where, over the course of a thousand heady nights, they exchange memories. Two wayward shatterlings, Camion and Purslane, are about to be decades late for Gentian Line’s thirty-second reunion.  Even worse, they have fallen in love; the only thing standing between them and possible excommunication from the Line is the golden robot Hesperus, on the Machine People, the other great meta-civilisation occupying the Milky Way.  But Hesperus is an amnesiac, and all that he can recall is a vague sense that he was on a mission of desperate importance before his memory was wiped. The lovers are hoping that providing a prestigious guest will mitigate their punishment – until an unexpected distress signal makes censure by their fellow clones the least of their worries.  After six million years of stability, someone has decided it is time to end Gentian Line.

It always takes me at least a couple of chapters to become thoroughly engrossed in a Reynolds’ tale.  Partly, because I find it difficult to immediately empathise with the posthuman world and its characters – and partly because the pace at the start of his novels tends to be fairly leisurely.  But the slow start steadily builds into a pan-galactic conspiracy that puts the two major meta-civilisations on a collision course.

As Campion and Purslane become increasingly enmeshed in the immense, shadowy plot to end their Line, the chase across space had me reading deep into the night.  While his characters don’t necessarily leap off the page, their sense of ‘other’ is extremely well depicted and Reynolds is a master at cranking up a plot by alternate revelations and yet more twists.

The themes of extreme time, the accretion of memories and their impact on humankind are familiar ones for Reynolds fans.  But, he also poses an interesting issue in making our main protagonists on one side of a situation, while also very clearly presenting with the other side of the argument – to the extent that I became aware that if faced with a similar situation, I’d probably be opposing the Gentian Line.   I’m still left wondering if that really matters.  Probably not, as it didn’t impede my enjoyment of the book.

However, when building a story for over five hundred pages of tight-packed text, there has to be a worthwhile denouement.  And, in my opinion, the ending certainly doesn’t deliver if Reynolds doesn’t write the sequel to tie off the strands he’s left hanging.   I’m conscious that this type of big concept science fiction is as much about the world-building and themes as the storyline and there may be many fans  who just enjoy the ride, anyhow.   But, for me, the twisting plot and steady building of narrative tension needs the kind of brilliant climactic ending Reynolds gave us in Century Rain to bring House of Suns to a truly satisfying end.